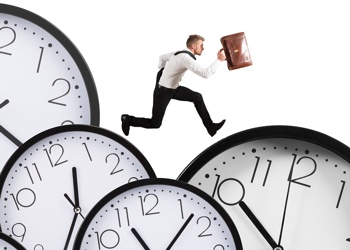 In a recent Leadership Team Retreat we used a survey based on 7 Deadly Time Traps for Leaders. The biggest trap this team fell into was Acceleration and Overload. This was closely followed by Reactive and Busyness and Coaching Skills. We agreed these three areas were intertwined. These were creating a growing sense of frantic urgency and stress within this team and rippling throughout the company.

In discussing research on the best practices of top performing organizations the team realized they badly needed to establish a more disciplined pruning process. As Jim Collins writes in Good to Great, “most of us lead busy but undisciplined lives. We have ever-expanding ‘to do’ lists, trying to build momentum by doing, doing, doing — and doing more.  And it rarely works. Those who built the good-to-great companies, however, made as much use of’ ‘stop doing’ lists as ‘to do’ lists.   They displayed a remarkable discipline to unplug all sorts of extraneous junk.” The team decided to initiate “kill meetings” and a project termination process. This would include reviewing key processes and products to trim out “all the white noise” and distractions.

It also became apparent that low coaching skills were trapping leaders in the Manager-Employee Dependence Spin Cycle. They needed a coaching framework and skill development to get the monkeys off their back and create empowerment and growth.

Taming “The E-mail Beast” and improving meeting effectiveness were also identified as vital steps in reclaiming their time and effectiveness.

A key theme through the retreat and these action plans was the importance of more regular offsite retreats to continue their strategic focus and team/leadership development. Far too many leadership teams are caught in ever faster spirals of crazy busyness. This team realized there’s much more to leadership effectiveness than increasing their speed.

How about your leadership team? Which traps are you falling headlong into? What’s your plan for overcoming them?

Posted in: Goals and Priorities