Leveraging the Power of the Halo Effect

As I wrote in “Perceptions Are a Leader’s Reality” a leader’s impact on others is dramatically increased by the presence of a few towering strengths or sharply reduced by one or two glaring weaknesses. This halo or horns effect was first documented with empirical research by Edward Thorndike, an early 20th century pioneering American psychologist. Based on his research asking commanding officers to rate their soldiers he found there was “a marked tendency to think of the person in general as rather good or rather inferior and color the judgments of the qualities by this general feeling.” Thorndike called this the “halo effect” in his 1920 article “A Constant Error in Psychological Ratings.”

“Confirmation bias” has now been well documented as our tendency to look for supporting evidence that confirms our positive or negative impressions and overlook contrary indicators. For example, research shows that attractive people are considered to be friendlier, more intelligent, and successful. Sports super stars (when they have a squeaky clean image) sell us cars, watches, airlines, and other products completely unrelated to their expertise. And the horns effect trashes their credibility when they’re caught using illicit drugs or embroiled in personal scandals.

The power of the halo effect has huge implications for leadership development. As I wrote in “Exceptional Leaders Aren’t Well Rounded” traditional development approaches use a model, framework, or set of leadership competencies as if all leadership qualities were all equal. The underlying — and unfounded — belief is that improving weaker areas will lead to increased leadership perceptions and effectiveness.

Without the multiplying bias of the halo effect, that might be true. Our database of over 500,000 multi-rater assessments on more than 50,000 leaders shows here’s what really happens: 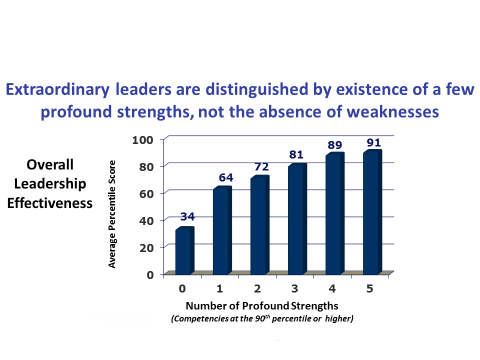 When a leader has no profound strengths (competencies rated at the 90th percentile) their overall leadership effectiveness is at only the 34th percentile. This is average or ordinary leadership that leads to mediocre outcomes — average levels of engagement, quality, safety, sales, customer satisfaction, etc.

Exceptional leaders like Steve Jobs, Kennedy, Churchill, or Gandhi were far from perfect human beings. The impact of a few of their towering strengths lit up a halo so powerful it cast dark shadows over their weakness and illuminated bright new pathways.

View next post:
Video: The Difference between Training, Mentoring & Coaching