My last blog reported on our Building Extraordinary Coaching Skills webcast  where I outlined 6 Steps to Building a Coaching Culture with Exceptional Leaders. During the webcast more than 80% of the over 500 participating sites completed a series of six surveys on the state of coaching and coaching skill development in their organization.

Two of the four “Real Reasons” that get in the way of good coaching discussed in the webcast are “insecure about the true value of one’s own coaching” and “misunderstanding the true nature of good coaching.” The response below clearly shows a big part of the problem: more than 55% of managers are not getting any coaching skill training at all! And another 20% only give skills to select managers. If a manager isn’t being given coaching skills, then it’s easy to say he or she is “too busy” or overtaken by other priorities to provide coaching. 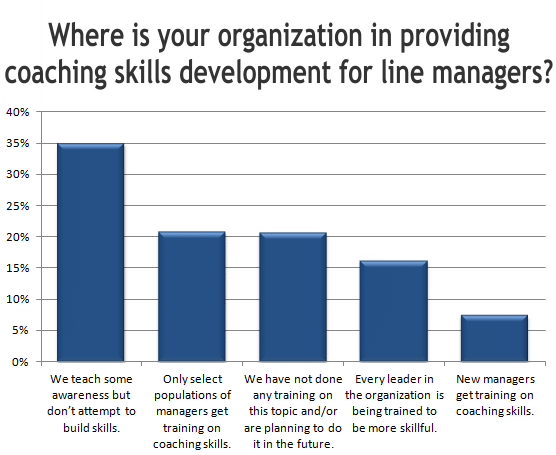 In keeping with the big lack of coaching skill development, nearly 50% of respondents report that coaches — mostly managers — don’t request any feedback on their coaching effectiveness. In the webcast I cited a large telecom company’s study showing that most managers believe they are providing coaching and score themselves high on this vital leadership skill. However, employees state they receive little coaching and score their leaders low. The lack of feedback we see here explains this big coaching gap. 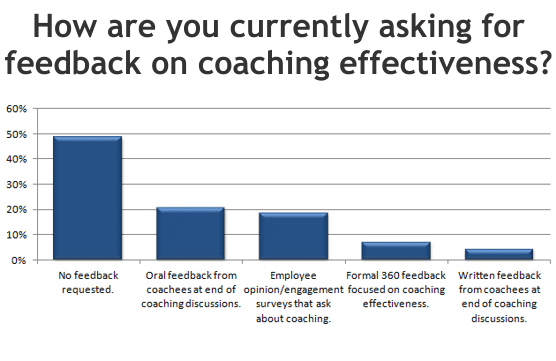 What gets measured gets managed. Our last survey response shows around 60% of organizations talk about coaching but don’t measure it.

You can view the webcast recording on demand at Building Extraordinary Coaching Skills.