Last week I delivered a one hour webcast on 6 Steps to Building a Coaching Culture with Exceptional Leaders. Participants from 41 countries registered to attend. At broadcast time 536 unique sites signed on — many were teams or groups viewing the webcast together.

The best feedback on whether participants feel they are getting high value is how long they stay tuned in. Busy development professionals and leaders vote with their feet and leave — especially a session that they didn’t pay for (it was complimentary) — if it’s not worth investing precious time. We were delighted that 95% stayed right until the end! Given all the time and resources we invested in designing and delivering this presentation, that was gratifying and very affirming feedback.

During and immediately following the webcast we asked a series of six survey questions. We were pleasantly surprised by an over 80% completion rate! The responses showed lots of room for improvement — which is likely why many participants joined the webcast in the first place.

This blog post reports on the first three survey responses. My next post will show the results of the other three questions. 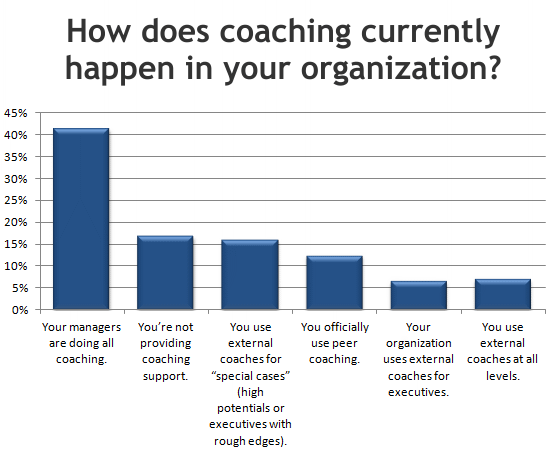 Most organizations rely on managers to provide coaching. But as we see in the next question, they’re not doing a very good job. A minuscule number of managers are extraordinary coaches making a significant difference.  Over 40% of managers don’t coach at all or do such a poor job it hurts more than helps! Another 40% get just a C or average.

The biggest reason for lack of coaching shows that this vital leadership activity is crowded out by other priorities. In the webcast I discussed what we’ve found gets in the way of coaching. Lack of time is most often cited. That’s essentially the same as the priority barrier we see here.

As I went on to discuss in the webcast, lack of time is an excuse. We’ve found there are really four underlying “Real Reasons” managers aren’t providing more coaching. I’ll discuss that a bit further in my next blog post.

You can view the webcast recording on demand at Building Extraordinary Coaching Skills.