During last week’s first public workshop (these sessions are usually run in-house) of The Extraordinary Coach in Calgary, the lights came on for a manager from a technology company.  Like many managers — and especially those in very technical organizations — Dave viewed coaching as directing, advising, and training his direct reports. Since he was promoted because of his deep technical expertise, he defined his role as the top technical problem solver in his team. That commonly held view — by both him and his team members — put Dave into this spin cycle: 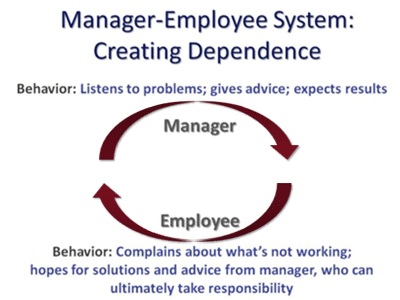 Dave was working harder and harder as he tried to stay on top of all the issues in his department. His team members were pushing most of their problems — especially technical ones — up to him. His coaching sessions and performance review sessions, as with many managers, left the ownership of most issues with him. He was increasingly frustrated by team members’ failure to follow through on the commitments and plans Dave set with them.

The lights came as Dave realized he was doing most of the talking — consisting mainly of telling — in these sessions. So the plans set with team members were really his directives. That led to a repeating series of follow up sessions as he prodded and pushed for team members to meet the plans and commitments set with Dave. He now realized he was getting nominal compliance but not real commitment. He was spinning his wheels and looking for a new approach.