No one says a word about the moose. Everyone carries on polite and earnest conversation as if this situation is very normal. Meanwhile the moose is eating papers at one end of the table while plopping out moose pies at the other end of the table splattering a few participants’ business suits. Team members are passing papers around the moose’s legs. They shift in their chairs to make eye contact with each other under the moose’s belly or to see past it to the front of the room. Papers need to be pried out from underneath the moose’s huge hoofs. When the moose lifts its head, his massive antlers poke into the meeting room ceiling, raining down chunks of ceiling tile and knocking out a light. No one says a thing about this. The leader carries on blissfully with the meeting. 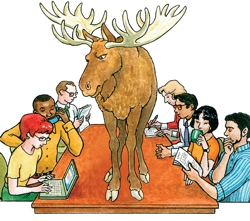 This, of course, is not a real scenario (at least, not in my experience!), but a symbolic one. The moose represents an issue that everyone knows is a problem but isn’t being addressed. People are trying to carry on as if things are normal. Meanwhile the issue is blocking progress and has caused some team members to tune out of conversations. Like a dysfunctional family with an abuser in its midst, no one wants to confront the problem. By failing to declare the issue, they further empower it. The moose grows bigger.

The moose-on-the-table scenario is one that we run into very often within management teams. The problem is that conversations among the team aren’t authentic. They don’t deal with the real issues that are blocking progress. Some teams have a huge moose to deal with; others have a smaller moose.

Some teams have a whole moose family crowding them out. Do you have a moose on your meeting room table? Here are a few symptoms:

How do you deal with moose-on-the-table? There are many potential causes of the problem, so there never are any pat answers to that question. Timing is everything. Depending upon the situation and players involved, poorly timed or clumsy attempts to deal with “moose issues” can be a CLM (either a career limiting move…or career limiting moose).

One way of dealing with the moose-on-the-table is to introduce the concept to everyone on the team and play with it. It’s a powerful and fun way to get serious issues out in the open. Some teams have given everyone a little stuffed moose. Others made up Moose Hunting T-shirts after a retreat where we discussed and resolved tough issues. You could get people at a meeting to anonymously write down and hand in a few of the biggest moose they feel are present. Cluster the similar issues and hold a secret ballet vote on the top clusters. If you suspect people aren’t being open during a discussion, ask “is there a moose-on-the-table we need to talk about?” Or if you see a potential issue emerging you might say, “I’d like to put a little moose-on-the-table…”

For all the talk of communication today, there’s pitifully little of it going on. As Mark Twain once observed about the weather, many managers talk about communication but too few really do anything about it.

Check out Moose on the Table:
A Novel Approach to Communications @ Work
by Jim Clemmer

Steep volume discounts – give one to your entire team!

View next article:
Assessing Our Ability to Influence Others

Moose-hunting at a workshop or retreat: How to Have Courageous Conversations Addressing Barriers to Teamwork